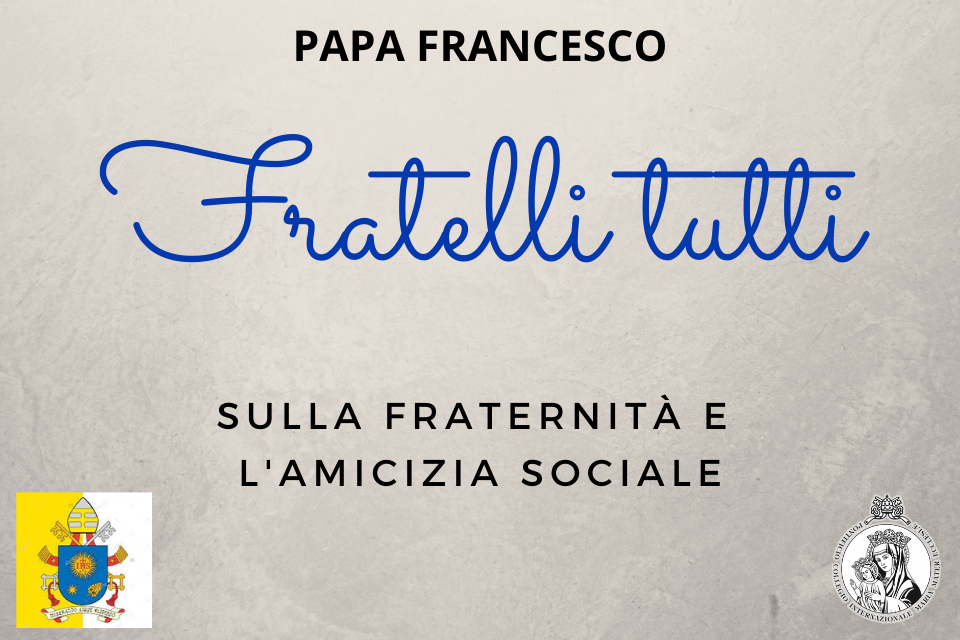 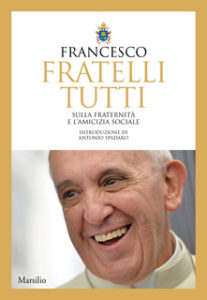 The Holy Father Francis published on Saturday, October 3, on the feast of St. Francis on the 4th of the same month, the encyclical “fratelli tutti”, where he says he wants to give a “humble contribution to reflection so that, faced with different current ways of eliminating or ignoring others, we are able to react with a new dream of fraternity and social friendship that is not limited to words”.

The encyclical is composed of 7 chapters. The Holy Father wanted to begin the document by outlining a series of important factors that today overwhelm the world and prevent fraternal love and friendship, which should be present in every person. These factors aim at the person, at his or her center which is threatened by so many adverse elements: worldly discard, rights which are not so universal, conflicts and fear, pandemics, information without wisdom, submission and self-loathing. Nevertheless, the Holy Father concludes this first chapter with a message of hope. He says: “God in fact continues to sow in humanity seeds of good. It is these seeds of good that the Pope explained in the other 7 chapters of the encyclical.

Chapter 2 is addressed to the “stranger on the road” taking as an example the parable of the Good Samaritan (Lk 10:25-37). In fact, “love does not care if the wounded brother comes from here or there”.   The parable is “an illuminating icon” because it shakes the man and forces him to see around himself and lend himself for the other, for the good of the other. The inclusion or exclusion of those who suffer along the way is present in every nation, and for that, every nation must reflect and implement decisions to help those who suffer. Let us look at ourselves to find out which character in the parable we resemble the most. This chapter ends by inviting teaching through catechesis and preaching so that they “include more directly and clearly the social meaning of existence, the fraternal dimension of spirituality, the belief in the inalienable dignity of each person and the motivation to love and welcome all.

Chapter 3 appeals to the structure of the human being, to his full realization which is made with a sincere gift of himself. Entitled “Thinking and Generating an Open World”, it wants to be a reminder of possessing the inalienable human dignity, and this makes it “possible to accept the challenges of dreaming and thinking about another humanity.  The fact, therefore, of affirming this inalienability of human dignity, opens to a series of challenges and makes it possible to possess an open heart, title of the 4th chapter. Remembering that “man is the limitless being that has no limit”.  , Francis invites us to open our hearts to go beyond prejudices, borders, promoting people and moral good, solidarity, rethinking the rights of peoples, and the meaning of property.

Chapter 5 refers to the best politics, the one that allows social friendship and brotherhood. This is achieved when it is directed to the realization of the common good. A policy that is not intended to be “populist” but a policy that, in order to protect and make the poor realize themselves, seeks to give work to all in suitable conditions. This implies an abundance of an individualistic liberal vision. In this sense, the Holy Father criticizes the technocratic paradigm, saying that it would be necessary for media propaganda to foster the formative role of fraternal friendship, trying to ensure that international powers are increasingly at the service of all. This also means the care of the planet because it is a loan that each generation receives and must transmit to the next generation.  The political order must advance social charity. In fact, at the end of this chapter, the Holy Father’s appeal is as follows: “The questions, perhaps painful, will be: “How much love have I put into my work? How much love have I put into my work? What imprint have I left in the life of society? What realities have I built? What positive forces have I released? How much social peace have I sown? What have I produced in the place that has been entrusted to me?”

Chapter 6 is based on dialogue and social friendship. In fact, “the lack of dialogue means that no one, in individual areas, is concerned with the common good, but rather with obtaining the benefits that power provides, or at best, imposing its own way of thinking.  Dialogue enables us to build together, it is the foundation of consensus, where consensus itself leads to truth. It is an art, the art of encounter that is laborious and artisan but necessary because it is where we open ourselves to the other and “give” something in favor of others.

Chapter 7 opens the horizon to new paths of a new encounter: “In many parts of the world there is a need for paths of peace that lead to healing wounds, there is a need for peacemakers willing to initiate processes of healing and renewed encounter with ingenuity and boldness. “The main ingredient will be the search for truth, the pillar of these new paths. Oriented towards the poor and the resolution of conflicts, where there are struggles but also there is and must be the per-gift. “Of course, it is not an easy task to overcome the bitter legacy of injustice, hostility, and mistrust left by the conflict. It can only be achieved by overcoming evil with good (cf. Rom 12:21)” For those who feel the attraction of violence, Jesus himself reminds us “put your sword in its place, for all who take up the sword will die by the sword (Mt 26:52).

Finally, chapter 8 shifts the emphasis to the world religions that must be at the service of the fraternity. These men and women are completely dedicated to the service of God and therefore of men because all of us are “creatures called to be sons or daughters of God. The dialogue between all religions is given because we all have in common the foundation of the consciousness of knowing that we are all children because we know that making God present in society is good for all. Religion cannot use violence to achieve the conversion of peoples, on the contrary, strong in its own identity, it evangelizes itself with its own witness of life.

Finally, the Holy Father recalls the call for peace, justice, and fraternity which he had proclaimed together with the Great Imam Ahmad Al-Tayyeb: “In the name of God and of all this, […] [we declare] to adopt the culture of dialogue as the way, common collaboration as conduct, mutual knowledge as method and criterion” and recalls Blessed Charles de Foucault as the “universal brother”.